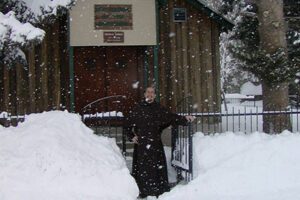 Lee Vining, California, is a small town (population 150 in the winter, higher in the summer) in the eastern part of California, not far from the Nevada border and up against Yosemite National Park. The town is named after a gold prospector, Leroy Vining, from the California gold rush days, but the ‘rush’ is long over and the town is now quiet, isolated and super-scenic. Back in its ‘rush’ days, the Jesuits started a Catholic parish, Our Savior of the Mountains, but when another town in the area, Mammoth Lakes, became a tourist ‘boom town’ (because of skiing) in the early 70s, the parish moved there leaving Our Savior of the Mountains as a mission-chapel. The church is now used only for one Mass on Sunday, when the Jesuit pastor drives in from Mammoth Lakes, and the rectory is empty, but well-maintained by the parishioners. And it is here that I am trying out, temporarily, the hermit life.

Being a hermit is harder than I thought.  The biggest hurdle — praying. Not that prayer is difficult, but a concentrated discipline of prayer is. I told myself that prayer is now my “job” and I would have to work at it, like any job. My goal was to have pronounced quality and quantity prayer time, something like a Zen monk sitting for blissful hour after blissful hour in focused prayer. Yeah, right. A big part of the problem was just getting started because there is always another interesting book to read, or another long hike into the super-scenic locale, or laundry to do, or snow to shovel, or skiing, or whatever.

When I used to teach flute years ago, I found that my students never practiced. When asked, they always responded that they were too busy. So I made them promise that they would practice for only two minutes each day. No matter how busy, anyone should be able to find just two minutes. Of course, once they began to practice, the two minutes became five, then ten, then twenty. The major hurdle is simply to begin. When asked to practice for twenty minutes, my students did not practice at all, but if asked for two minutes, my students ended up practicing for twenty.

Maybe that is the main lesson I have learned here in the hermitage. We often tell ourselves that prayer of any quantity or quality is impossible in this high-stimulus world of jobs, duties, social engagements, television, internet, email, radio, news, and gadgets galore. Well, let me tell you that even in the slow-paced and low-stimulus life of the hermitage, it is equally difficult. So, that is the advice from this hermit-in-the-making — to commit to two minutes of disciplined prayer each day. Two minutes, and your life will be ‘gravy.