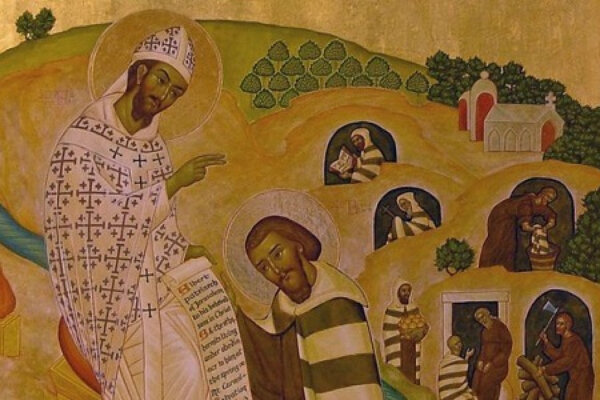 There are very few facts known about the birth of Albert. The first biographical data comes from the Canons of Mortara. Albert entered into this order around 1170. Around 1180 Albert began developing connections with the pope and the Roman curia. Between 1181 and 1183 he undertook two missions at the behest of Alexander III and Lucio III. The following year he was nominated bishop.

He was bishop of Vercelli for 20 years but continued to be involved in diplomatic activity on behalf of the popes. Some of his work was settling conflict between people or cities. But he was also very active in the area of legislation and organizational structure. He would ultimately provide these gifts in service to the hermits on Mount Carmel.

In 1204 the Canons of the Holy Sepulchre elected Albert as patriarch of Jerusalem. Pope Innocent III added the responsibilities. Of papal legate for the Holy Land and Middle East. Albert arrived in Palestine in 1206, residing at Acre since Jerusalem was occupied by the Saracens. Here too Albert became the mediator of various disputes. In fact, this role as mediator has led some to conclude that Albert became involved with the hermits on Mount Carmel because of a dispute among the members.

When exactly Albert wrote his formula vitae for the hermits is open for discussion. This document was addressed to someone named “B” which later traditions named “Brocard.” Albert becomes referred to in the Carmelite Order as “the lawgiver” for his development of a rather short document outlining the life of the hermits on Mount Carmel. Albert’s formula vitae which will eventually become the Rule of the Order.

By the 16th century Albert’s feast was celebrated on April 8. Later it was customary to celebrate his feast on September 17. There were attempts to have Albert proclaimed as a martyr but the Order continues to celebrate him as “bishop and legislator of our Order.”

List of Books From Edizioni Carmelitane on St. Albert of Jerusalem.

A cornerstone of formation for members of the entire Carmelite Family today as in the past is the Rule.

The book opens with a broad sweep covering the historical and religious environment of the eleventh to thirteenth centuries.

The large number of extant documents concerning the early thirteenth-century Latin Patriarch of Jerusalem, Albert degli Avogadri (c. 1150-1214), demonstrate both his impact on his times and the ways in which his life was shaped by his historical circumstances. Divided into two volumes, each of twelve chapters.

These and more books can be purchased directly from Edizioni Carmelitane or from other webstores around the world.

To place your order please contact Edizioni Carmelitane at edizioni@ocarm.org